We Are All One Review for Folk & Acoustic Music Exchange 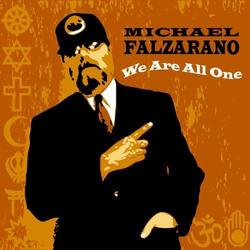 Michael Falzarano, for the past 4 or so years guitar player and singer for The New Riders Of The Purple Sage and before that an extended stay with Hot Tuna, as well as his own band has put together a disc in his own name with some great players. This is Falzarano’s third solo disc and he has Vassar Clements on this disc in some of the last sessions he did before he passed on, Buddy Cage, Jorma Kaukonen, Garth Hudson and Professor Louie among others helping to flesh out his aural vision on this disc.  On this 14-song disc Michael wrote 10 of the songs, co-wrote with Kerry Kearny two of them and the two remaining tracks are, one by the Reverend Gary Davis, and one by Leroy Carr.  His songs are well written and he arranges them on the disc so that the listener doesn’t fall into a rut nor get jarred by the bump moving to the next song.   The music goes from blues to Rock to Country to… however as stated the transitions are smooth and easy without being dull.  To get an idea listen to the treatment he gives to Reverend Gary Davis’ “Candy Man” with Vassar Clements fiddle, just a superb version of the song.   Give a listen to the beautiful and touching tribute to Allen Woody, bass player for the Allman Brothers and Gov’t Mule, “Last Train Out”.  The haunting and beautiful play of Buddy Cage and Jimmy Eppard on the instrumental “Gonna Power Down Now” ends the disc on a powerful note.   The keyboards play a prominent, without being overpowering, role in his music and quick look at who is playing them is quite revealing; Melvin Seals on Hammond Organ, Professor Louie on piano, Garth Hudson on keyboards, Pete Sears on piano, and Jon Marshall Smith on Farfisa Organ.  This is one of those discs that just seem to pick you up and put a smile on your feet as they glide around the floor keeping time with the bounce in the music.