The Story, So Far Review for acousticlevitation.org 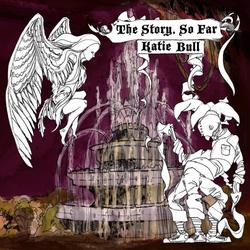 Katie Bull couldn't have picked a better crew of musicians to support her work, among them pianists Frank Kimbrough and Michael Jefry Stevens, bassist Joe Fonda, drummers Matt Wilson and Harvey Sorgen, each beloved by jazzfolk. The Story So Far is a frolic. She mixes standards with her own compositions, which are lively, sly, wicked and wistful and straddle the jazz/cabaret/singersongerwriter continuum. Lyrics to her own songs on the main album are included in the booklet.

Opening with "Which," asking the age-old question whether you are a good witch or a bad witch. The answer is a healthy mix of both. Technically, Bull toys with being naughty, which is a treat, yet some of her extended vowels are a little off, and her glissandi need a bit of tightening. She demonstrates a charming scat-ability in the standard "For All We Know."

Risking "Twisted," her musicians work for her, egging her on, and maybe she is nuts. There is a double tracking of the second chorus, and a bit of heavy-handed bel canto on the "you" in "Do you think I am crazy?" It's too clever by half, yet her clear enunciation throughout the song ameliorates her personal twists. The duo with Joe Fonda, "Go Ahead," is the track to audition: excellent phrase manipulation by both; a solid joy.

"Next Generation Doodlin'" is a nod not to Horace Silver's classic "Doodlin'" but to her young daughter drawing and writing, about peanut butter sandwiches, and eventually to a senator about Martin Luther King. "Jack" finds her using her a full deck in a clever love song based on playing cards. Naughtier is "Half Full": "I don't just swallow it/ I taste it too/ I'm going for the whole ride."
The final cut before the "bonus tracks," "Wake Up Time," has an oom pah pah rhythm and a blunt riposte to Bush: "No weapons of mass destruction found/WMD."

The album proper is followed by a quartet of so-called bonus tracks, labeled "The Dream Cycle," another reference to Dr. King" and continues the fairy tale-meets-politics-and-cabaret concept. Darker in tone than most of the album, it is backed by a piano quintet, where the piano takes the lead, the strings mostly slashing.

The packaging is visually striking, a threefold digipak with a booklet and bonus DVD with the musicians caricatured as medieval creatures. Performing on the DVD (and under the disc trays), hippie-colored actors from Atlantis Studio, as if the Incredible String Band joined the Radical Faeries, a vaguely mime-ish romp through the streets of Soho, as Bull sings a pair of standards, Rodgers and Hart's "It's a Waltz," plus "Some Enchanted Evening."

Katie Bull has certainly intrigued me. From The Story, So Far, I look forward to hearing what tales will she will next conjure.