Memphis Review for All About Jazz by NIC JONES 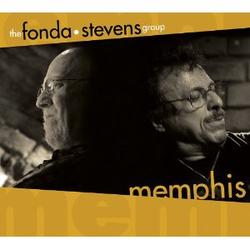 Memphis marks the 25th anniversary of the bassist Joe Fonda and pianist Michael Jefry Stevens' period of collaboration. Their quartet is a fine example of how a long established band can gel without becoming predictable, with many of its moves unforeseeable in advance. This helps to keep the music fresh, but it's the level of collective empathy that often takes it to another level.

This is obvious on "Whale Majesty," which as a model of subtle, veiled interplay that offers marked contrast to a lot of the bluster on offer here. Drummer Harvey Sorgen proves himself to be a master of color after the model of Paul Motian and the late Finnish drummer Edward Vesala, whilst trumpeter Herb Robertson's thin tone sketches small filigrees of sound and Stevens maintains coherence.

"Changing Tides" might almost be the other side of the coin. Robertson is majestic over rhythmic backing that's almost in opposition to his lines, but the band's collective experience and empathetic understanding resolves the resulting dichotomy. When Robertson does get heated it's largely in the interest of taking the music in another direction as opposed to anything more tiresomely egotistical, and when the resulting animation is resolved it's as a result of group endeavor.

"For My Brother" is proof enough that this is a group about more than just kinetic identity. Fonda is lyrical with his bow, as is a muted Robinson, and the unalloyed grace with which the music proceeds is ear food of a high order. Composition and improvisation co-exist in a way that might stem only from the level of mutual understanding these musicians have.

Despite its long existence the group didn't tour in the USA until 2008, although prior to that time it had wowed European audiences. That tour culminated in the recording session of which this set is the outcome and it's clear on "Memphis Ramble" that the group had reached a level of understanding in excess of even its usual working relationship. Funk might not be a quality that immediately springs to mind given the group's usual modern/free jazz stance, but here it is in a form that sounds perfectly natural. Robertson has absorbed the lesson of making notes tell from Miles Davis, and he proves this in his solo; the joyous collective shout of the piece, however, perhaps best sums things up.