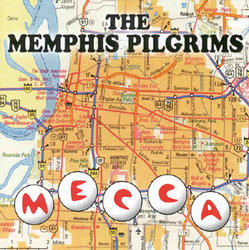 Kick off your shoes and get ready to dance! Mecca, the debut CD by Michael Falzarano & The Memphis Pilgrims, is chock full of good time, high energy performances and inspiring, infectious grooves.

The Memphis Pilgrims are a New York City quartet led by Hot Tuna guitarist Michael Falzarano. These fellas may be born and raised in the city, but they have produced a collection of music steeped in rich southern tradition and heavily influenced by the early rock ‘n’ roll rhythm and blues of historic Memphis.

Joining Falzarano, who not only played guitar but sang and wrote all 12 songs on this disk, is Hot Tuna member Harvey Sorgen on drums, and fellow New Yorkers Jimmy Eppard on guitar and backing vocals and Steve Rust on bass and backing vocals.

This CD grooves from one selection to the next. The first number “It’s Over,” is very funky and features a screaming Danny Lewis organ intro. The vocals are strong and the guitar hook sings like a bird.

“I Was The One” is a bar room rock ‘n’ roller featuring some great honky tonk piano and a rock solid back-beat. “I Want You Back” starts off with some cool rockabilly guitar a la Carl Perkins and Scotty Moore, and transforms into a thundering freight train boogie woogie that is highlighted by some great interplay between the guitar, fiddle and piano. Falzarano digs deep and sings from the heart on every selection.

Mecca is one of those CD’s that just keeps ending up in my CD player. Every time I play it I hear something new. The recording is clean and the performance is live and energetic. I find myself singing and dancing from the first song to the last.

I would hope that the Pilgrims have plans to tour simply because I would love to experience this great band in person. Their music is gut level and honest, it smolders with grittiness and cool. Congratulations to Michael Falzarano and the Memphis Pilgrims for one of the best CD’s I have heard in a long time