Live at the Bunker Review for All About Jazz 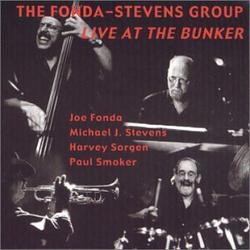 “The Fonda-Stevens Group” is arguably one of the finest and hardest working modern jazz outfits in the business. And while “Leo Records” is synonymous with producing improvised, free – jazz and music that is largely unclassifiable, the label generally skirts the bleeding edge of what some refer to as – new music. Therefore, this quartet’s new recording titled, Live At The Bunker marks a slight yet welcome shift in strategy for this legendary UK-based label.

The quartet opens this set with soulful balladry on the piece titled, “For Us” as trumpeter Paul Smoker exudes heartfelt lines in conjunction with pianist Michael Jefry Stevens’ velvety undercurrents. However, the musicians pull a 360 degree turnaround on the second track, “Borrowed Time” which is marked by Smoker’s genial muted trumpet lines, linearly performed unison choruses, engaging call and response improv and a brief swing motif. On this piece, the band prominently exhibits the virtues of being in synch, as there is little margin for error amid these odd-metered rhythms, cleverly constructed themes and intricately executed passages. Yet the band also excels at integrating a loose vibe which affords the soloists ample breathing room for reinventing the compositional subject matter.

Bassist Joe Fonda and drummer Harvey Sorgen anchor the intense momentum for the soloist’s climactic choruses and catchy melodies on “Don’t Go Baby”, whereas the quartet finalizes the brisk proceedings with the gospel induced “Oh, Lord, It’s Nice To Sit On Your Porch Today”. Here, the band pursues crashing cadenzas along with Stevens’ lush interludes and Smoker’s deviously constructed yet altogether playful lead soloing. Without further ado, Live At The Bunker is a magnificent release and a late entry into this writer’s hypothetical top ten list for 2000. Folks, modern jazz doesn’t get much better than this!