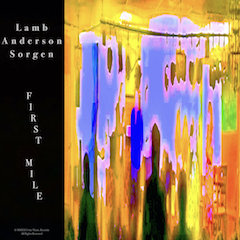 For a puncher like Sorgen, who never seems to tire, the whole of First Mile is a study in the finer subtleties. For Lamb, who wrote four of the seven tracks and had his rhythmic hand in the others, First Mile is the only response to the long form current urgency of the day. For Anderson, who provides the gravity between his trio mates, the music is a platform for his rooted, stoic approach.

"Pumpkin Eater," the first of Lamb's charged four, kicks off sprightly and never lets up. Lamb, a true alum of the Dave Brubeck, Teddy Wilson school of engaging all eighty-eight keys, provides the pop drive and active melodicism that sweeps the tune into the muscular romanticism of "Song For You" Sorgen holds back, keeping the swing, never losing vitality.

Dedicated to the late Frank Kimbrough with whom all three had worked, Jorma Kaukonen's iconic "Embryonic Journey" (from the Jefferson Airplane's equally iconic Surrealistic Pillow (RCA, 1967) receives a majestic, gospel arrangement and serves as the centerpiece to the entire affair. The trio's touch is one of grace and gratitude, homage and respect.

But they also want you to know they haven't totally put aside their mischievous jump-wildness, so everyone posits muscle on the post-bop burner "Covidity" and the humorously martial stepped "Street Fair." After twenty-five years on sometimes disparate, sometimes shared roads, there's an ease to First Mile that is deserved by one and all.