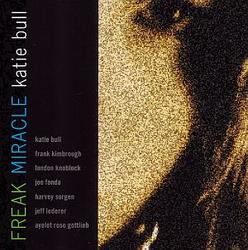 Five albums into a career that can only be described as singular, think of vocalist Katie Bull as a jazz prism, refracting musical light in endlessly unpredictably ways. It can be as soft and inviting as tea-light or as explosively disconcerting as spontaneous combustion. Vagaries of love, explored from multiple angles on her previous albums, remain a through theme. Here the spectrum extends from the icy rejection that marks Jobim’s “How Insensitive” through the staggering pain of “Removed,” the romantic fatalism of “Blue Light” and the sweet reverie of “The Gifts.”

Bull is especially skilled at romantic bewilderment, as is evident on such uniquely re-imagined covers as a jagged “I Thought About You” that defies Jimmy Van Heusen’s melancholically rhythmic clickety-clack, and on a “Let’s Call the Whole Thing Off” that, thanks to cleverly injected interludes, creates a lively Gershwin-Bull debate. Widening her focus, Bull employs the interplanetary cacophony of “Road Trip” to craft a sage commentary on intolerance, simultaneously speaks to personal and social breakdown (with special guest Ayelet Rose Gottlieb providing fine vocal counterpoint) on “You Were There,” and shapes a bebopping homage to mentor Sheila Jordan on “Back to Square One.”

Twice she injects snippets—the waking jungle of “Labyrinth” and the soaring “Alight”—that are like musical amuse-bouches. But Bull is only one integer in this electric equation. Equal credit must be extended to her longtime co-conspirators Frank Kimbrough (piano), Joe Fonda (bass), Harvey Sorgen (drums) and Jeff Lederer (sax), plus fresh inductee Landon Knoblock (piano, Fender Rhodes, accordion).