Forever Real Review for All About Jazz 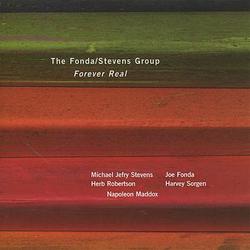 Since emerging on the scene in the late '80s with trumpeter Dave Douglas and the Mosaic Sextet, pianist Michael Jefry Stevens, bassist Joe Fonda, and drummer Harvey Sorgen have all worked in a variety of contexts. Fonda was Anthony Braxton's bassist of choice in the mid-'90s; Stevens has worked in trios with Mark Whitecage and Dominic Duval; Sorgen has been involved with everything from free jazz to the blues/roots group Hot Tuna. But it's within the context of the longstanding Fonda/Stevens Group that their musical personalities have been at their most compelling.

With five previous releases as either a quartet and quintet, it's trumpeter Herb Robertson who has been the closest thing to a constant fourth member, having been on most of the group's recordings, including '02's outstanding The Healing. With Forever Real, the quartet of Fonda, Stevens, Sorgen, and Robertson continue to mine territory that defies categorization. While the seven compositions by Fonda and Stevens live, without a doubt, in more liberated improvisational territory, what gives them a stronger sense of purpose is their compositional scope. Stevens' "The Stalker, for example, revolves around a pseudo-Latin groove that is thematically reminiscent of Don Byron's "Next Love from Tuskegee Experiments, but with a lighter yet no less substantive complexion.

Fonda's "Relentlessness, on the other hand, with its initially-persistent bass ostinato, is more idiosyncratic, with an odd theme that transcends restrictive bar lines. The tune eventually dissolves into a free improvisation by Fonda that resolves into an even quirkier and less rhythmically-straightforward construct over which a collective improvisation concludes. Stevens is, as a rule, the more structured and accessible composer, with Fonda's writing more about not-so-simple ideas as a basis for exploratory work by all involved. Stevens' "A Question of Love begins with a free piano solo but ultimately finds its way into a gentler space. Fonda's "Cotton, on the other hand, centres on a more obfuscated theme that merely serves as a basis for the group's more abstruse leanings; although the piece actually finds its way into an almost funky groove that serves as a feature for guest Napoleon Maddox's "Human Beat Box sounds and stream-of-consciousness poetry.

Everyone demonstrates a fine ability to skirt the edges of convention, while at the same time stretching its boundaries. Most notable is Robertson, who manages to imbue the compositions with an askew sense of humour, preventing things from becoming too serious. Coaxing a surprising variety of textures from his horn, Robertson is a fiercely original player whose refusal to compromise has made him trumpeter of choice on a surprisingly large number of recordings—over seventy to date.

Curiously and consistently overlooked in North America, the Fonda/Stevens Group, thankfully, enjoys a solid reputation in Europe that permits the group to continue. And with Forever Real, it manages to combine heady composition with more visceral improvisation, making this a potent and highly recommended release for those who enjoy their free music with a little more form.