Evolution review for All About Jazz 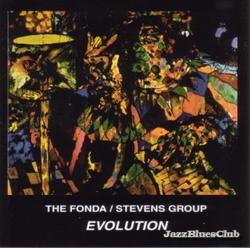 Reviewing can be difficult: there are an awful lot of discs out there that sound like all the rest. This ain't one of them. Evolution confirms that the Fonda-Stevens Group is one of the best-kept secrets in jazz. This fourth release from the quintet is one of the best showcases to date for five of the most exciting instrumentalists currently playing. In an age when most of the best-known exponents of the genre have gone into the lick-recycling business, bassist Fonda and pianist Stevens, along with Herb Robertson (trumpet, cornet, fluegelhorn), Mark Whitecage (alto sax, clarinet), and Harvey Sorgen (drums) play jazz in the truest sense of the word: not what your grandfather played, but the music of excitement, the music of exploration. The Group is playing within the tradition: they play heads (which are usually hypnotically catchy) and solos, their instrumentation is ordinary for jazz, and they swing.

But "tradition" for this quintet is not artificially truncated to leave out the Sixties and Seventies. The variety of tempos, harmonies, dynamic levels, and moods of these pieces - and within them - is an artful combination of the best of what is conventionally understood as jazz with the compositional and timbral innovations of John Coltrane, Albert Ayler, and those who worked with them and came after them. Robertson and Whitecage can essay the prettiest of melodies with perfect straightforwardness (check out the gorgeous "Strayhorn" and the swinging "Birdtalk"), and burn at the outer edges with no less compelling confidence. The extraordinary Stevens never plays what one might expect, but never seems to make a misstep, displaying just as much versatility and quick-change ability as the horn players. He can play yearning ballads ("Strayhorn"), genial bop, sometimes with a Monk flavor ("From the Source"), contemporary classical coloristics ("2nd Time Around" and "From the S! ource"), furious energy music ("In the Whitecage"), and more.

Fonda is no less sensitive an accompanist, but he stands out here more for his compositions: "In the Whitecage," "2nd Time Around," "Song for My Mother" and "From the Source" - the latter in a version strikingly different from that on his From the Source album. Each is uniquely crafted and immediately much different from the others; "2nd Time Around" is especially noteworthy for its extended and treacherous unison section; "In the Whitecage" and "From the Source" sprawling tours-de-force that take in a panorama of styles and moods. Stevens' contributions, "Strayhorn" and the retro "Birdtalk," are less immediately ambitious (although they both contain more than a few surprises) but no less appealing.

Every so often there comes along a really striking disc, one that serious jazz listeners should not overlook. Here it is. Don't miss it.