Certified Organic Review for All About Jazz 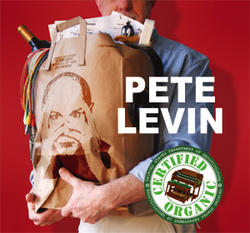 Trio music generally combines bass and drums with a piano, guitar or saxophone. Organist Pete Levin deviates from this formula on Certified Organic. The only constants are himself and drummer Harvey Sorgen. Apart from that, he employs one of four guitarists on each of the 10 tracks, one of two percussionists on several, and a saxophone on two. So, in essence, it's an organ-led trio plus one or two on all but three songs. The organ also plays the bass parts throughout.

Levin has an extensive resume, having performed or recorded with hundreds of jazz and pop artists. Among them are Paul Simon, Annie Lennox, Miles Davis, David Sanborn, Jaco Pastorius and Wayne Shorter. Levin acquired two Grammy Awards during the 1970s, when he electrified the Gil Evans Orchestra. He has also contributed to the scores of several TV commercials, dramatic series and feature films, including Missing in Action, Lean on Me, Silver Bullet, Spin City and The Color of Money.

"I'm Falling" is a funky groove that features John Cariddi on guitar. Levin leads this delightful piece for the most part, but Cariddi's rhythm and Sorgen's dexterity give it extra flavor. Cariddi also enjoys a solo. Percussionist Ernie Colon offers congas throughout.

"Love for Sale" is a bouncy spin on the Cole Porter classic. The pace changes during the transitional phrases, but the song remains upbeat throughout. Using the organ to cover the bass line in addition to the regular organ notes is excellent throughout the set, but it stands out a little more on this track.

The ensemble pays tribute to Pastorius with an interesting take on "Teen Town," which the acclaimed bassist wrote during his Weather Report years. Jesse Gress takes over on guitar and plays the lead along with the organ bass. Erik Lawrence adds the saxophone. The result is just close enough to the original to be appreciated by fans of the Weather Report version, but is a very different song in the hands of Levin and company.

Five of the 10 tracks on Certified Organic are Levin originals. While the lead musician is often the focal point of trio projects, Levin gives his sidemen plenty of opportunity for expression. It makes for a thoroughly enjoyable jaunt.

With Grace In Mind
Dreamstruck
Lamb-Anderson-Sorgen. "First Mile"
Twelve Improvisations
Ornettiquette
Karl Berger - "Gently Unfamiliar"
Aercine
Hot Tuna - And Furthurmore...
Outlet
By Time and Gravity - Tim Kapeluck
Pair a Dice Found
Three
A Scent In Motion
Afterfall
Wild Weekend
Today, This Moment
EAR THEATER
Live at the Bunker
Certified Organic
Freak Miracle
The Story, So Far
As Above So Below
Trio
Consensual Tension
Memphis
That's What I Want to Do
The Healing
Evolution
Live From Brugge
Parallel Lines
The Wish
Forever Real
We Are All One
Mecca
...at any other time
Live at Sweetwater Two (EAGLE)
Live at Sweetwater Two (RELIX)
LIVE IN JAPAN (EAGLE)
LIVE IN JAPAN (RELIX)
Novella