And Furthurmore... Review for allmusic.com 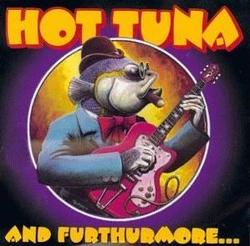 On this live album culled from their summer 1998 performances as part of the Furthur Festival headlined by the post-Grateful Dead band the Other Ones and released on Grateful Dead Records, Hot Tuna comes off as what they are: a veteran act with some new members more interested in playing their more recent material than their old chestnuts. The core duo of singer/guitarist Jorma Kaukonen and Jack Casady is joined by second guitarist/singer Michael Falzarano, keyboard player Pete Sears, and drummer Harvey Sorgen for an unusually full Hot Tuna sound. But unlike the period in the late 1970s when an expanded lineup meant volume and near-heavy metal playing, this edition of Hot Tuna is a much more mellow outfit, executing the Kaukonen song catalog -- from Jefferson Airplane favorites like "Embryonic Journey" and "Third Week in the Chelsea" to Hot Tuna standards like "Been So Long" and "Watch the North Wind Rise" -- with a restrained, craftsmanlike approach that emphasizes their folk-rock melodicism. That, at least, is what happens for the first eight of the 13 selections and about the first 38 of the 77 minutes of the disc. The second half is dominated by Falzarano, who sings lead vocals on songs of his own composition, such as "Gypsy Fire" and "Just My Way," leading the group through lengthier and more rock-oriented excursions. Kaukonen reasserts himself by the end with an 11½-minute version of "Funky #7," but And Furthurmore... still ends up being two different records in one. Lenient as Hot Tuna fans may be, they probably don't need any more versions of the old songs on the first part, and they may not be too pleased with Falzarano's takeover of the band in the second part.