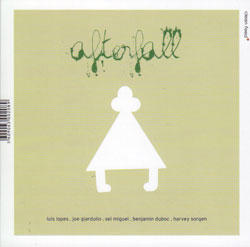 Afterfall is an international quintet consisting of Portuguese (guitarist Luis Lopes and trumpeter Sei Miguel), American (tenor and soprano saxophonist Joe Giardullo and drummer Harvey Sorgen) and French (bassist Benjamin Duboc) musicians. Their first meeting in a Lisbon studio is documented here. The methodology is free improvisation, but as the instrumentation suggests, there are strong free jazz elements at work here in both the roles and the textures the band favors, from the Cool-era sound of Miguel’s pocket trumpet – always muted and played in the middle-register – to the vocalic wails of Giardullo’s saxophones. The band is both genuinely collective and spacious, with a shared willingness to let ideas develop in their own time. There’s a certain transparency in the band’s music, with one musician’s voice passing through another’s. Most interesting are microscopic, granular bits of sound that abound here, sometimes ultimately traceable to Sorgen’s subtle cymbal and snare work, but more often to Lopes’ thoroughly electronic conception of the guitar. His gritty waves of barely audible sound contribute much to shape the textures prevalent here and when he takes the lead he has a sense of sonic play that extends from the glassy quarter-tones of the opening “Shut Up Goddess” to the sustained feedback on “Return of the Shut Up Goddess”, his guitar almost shakuhachi-like. While Sorgen and Duboc can provide fields of scintillating detail, they’re also capable of tremendous drive, most notably in the powerful backing they provide Giardullo for his intense tenor exhortation on“American Open Road with a Frog”, a whimsical title likely inspired by the soulful multiphonic roar that the saxophonist develops. The extended “Triptych” is notable for the collective composition of which the group is capable, Duboc (a brilliant arco player) and Lopes developing spontaneous figures that become both insistent support and provocation to the horns. There are musical relationships developing here that bode well for the future.