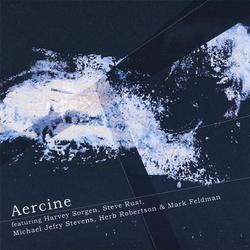 As we head away from a very proud avant garde jazz and towards a neutered entity called improvisational music, it is refreshing to hear an album of freely improvised music so deeply rooted in the jazz tradition as this eponymous release from Aercine. These guys don’t exactly play the blues, but they do play with them. These musicians seem to understand that experimentation is a means to an end, not a substitute for a thorough understanding of the jazz dialectic; that, in other words, no matter how far out there you go, it still don’t mean a thing if you ain’t got that swing. Crucially, they also know that once you’ve established that swing, it’s ok to merely imply it.
There’s a lot here beside the jazz, and I mean ‘beside’ as in next to as opposed to instead of. Not unlike the late Don Cherry or the Art Ensemble of Chicago, Aercine use jazz as their methodology for exploring harmonic ideas from 20th century classical music and other sources outside of mainstream jazz. Dig, if you will, Mark Feldman’s bluesy violin solo on the group’s theme song, with its clever quote of the famous basson line from "Le Sacre du printemps."

As I say, this music is very advanced harmonically. You don’t doubt that pianist Michael Jefry Sevens knows his serialism but his playing never gets tedious because he also knows his Monkisms. Likewise, trumpeter Herb Robertson’s playing contains echoes of Cherry, Don Ayler, and Lester Bowie and also of Freddie Hubbard and Miles Davis. Bassist Steve Rust and Drummer Harvey Sorgen are supple enough to accommodate whatever the rest of the group throws at them, knowing when to play right on the beat, when to take a little bit off of it, and when to deconstruct it altogether.

Not every volume of improvisational music wants or deserves to be called jazz. This album does, clearly embracing the tradition as it advances it in its own unique way. At times they find a groove, and even when they are at their most abstract there seems to be a vestige of one present. Combining elements from avant garde classical and free jazz with the blues and gypsy violin, Aercine creates a unique and deep jazz experience.